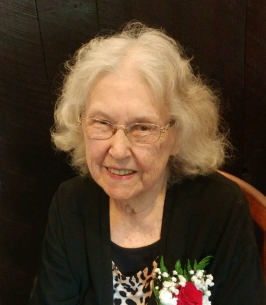 Antonina M. Bilski born May 11, 1920, died on Friday, July 1st, at the age of 102. Antonina was a long time resident of Newton Upper Falls, MA. She was the youngest child of Andrew S. and Anelia Szyjan Huminik, of Poland. In 1940, she married the late Edward J Bilski. She was the loving mother of Carole Kreutzer and her husband Dennis, Brenda Arduino and her late husband Don, and the late Baby Mary. Antonina is predeceased by her loving 3 siblings John, William and Emily. She is survived by 3 grand-children: Susan Kreutzer, Bill Arduino and his wife Janine, and Sheryl Arduino, and was a proud great grandmother to Nathan, Jillian and Kaitlin. Antonina was also a loving aunt, great-aunt, cousin and step-sibling.

She was known to family and friends as Toncha, T, Ann, Granma and Great-Granma. Antonina was an avid gardener, knitter, crocheter, lover of birds, and spent many of her years with her cat Muffins. She was an avid Red Sox Fan, and rarely missed a game or update on the team. She read the Boston Globe (front to back) daily and knew everything that was going on in and around her city. She was a proud citizen of Newton and was honored by the mayor on her 100th birthday. She was a faithful member of Mary Immaculate of Lourdes Church in Newton Upper Falls.

A thank you to the care she received while at Riverbend Nursing facility in South Natick, MA. As well as a special thank you to all of the nursing care at 6W at Newton-Wellesley Hospital and the guidance of Good Shepherd Community Care.

Viewing will be at Burke Funeral Home in Wellesley, on Thursday, July 7th from 9-10:30 am, followed by a mass at Mary Immaculate of Lourdes in Newton at 11 am. Interment following at the St Mary’s Cemetery in Needham, MA

In lieu of flowers, please consider donating to your local animal shelter or garden club in Antonina’s memory.