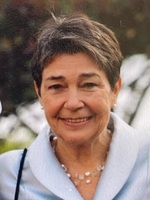 ﻿Elizabeth ("Betsy") McDermott of Wellesley Hills, MA, formerly of Riverdale, NY, died on Saturday, May 7 after a brief illness. She was 83.

Betsy is survived by her son Michael and his wife Tracy, of Duxbury, MA; her daughter Suzanne, of New York City and Charlestown, RI; her son Sam and his wife Blake, of Medfield, MA; and her grandchildren Kate, Carly, Gus, Stella and Charlie. She is predeceased by her husband Paul F. McDermott and her siblings Patricia Draddy, Marijean Sommer, and Thomas Shea.

Betsy worked with children as a speech and language pathologist for decades. Her reservoir of energy and positivity made her a crusader against anything that might hold back her students. She transformed the landscapes of many of their lives by helping them to find ways to communicate. Twenty years after Betsy's retirement, the annual holiday cards from students and their families continued to arrive and find a place on the refrigerator.

Betsy was a beloved wife, mother, grandmother, sister, and friend. She was a warm person who had an infectious love of adventure and the kind of imagination that could incite mischief. She sometimes announced spontaneously that she was running to one of the museums that occasionally called to her - The MFA and Isabella Stewart Gardner in Boston and The Met and The Frick in New York -- and then she would actually run out the door.

She aspired to be a good singer, a skilled storyteller, a careful driver, but it was not to be. The mind and spirit that were her gifts drove her to learn. Betsy liked to read, sometimes changing direction at the start of each year, from Scandinavian noir to Dostoevsky, then on to world religions. She was soft-spoken, and entered a room with kindness. Betsy had a slight air of secrets about her, and one wanted to know them.

She was entirely devoted to her family, and raised her children with her whole heart. She taught unconditional love, and the strength of her passions was her example. And yet somehow she was always there - packing lunches, sitting in the stands, laughing as she stirred a pot in the kitchen. And Paul, to whom she had been married for nearly six decades and who predeceased her by four months, had been at her side through all of it, every bit as committed to the adventure.

Betsy lived a life that was quietly exceptional and she made the world a better place. She will be tremendously missed and deeply mourned.

The McDermott family welcomes family and friends to attend the wake on Friday, May 13th from 4-7 p.m. at Henry J. Burke & Sons Funeral Home, 56 Washington St., Wellesley. A funeral mass will be held on Saturday, May 14th at 11 a.m. at St. John the Evangelist Church, 9 Glen Rd., Wellesley. We will also be remembering the life of Paul McDermott.

In lieu of flowers, memorial donations may be made to Museum of Fine Arts Boston (https://www.mfa.org/give) or Care Dimensions Hospice House (https://giving.caredimensions.org/site/Donation2?df_id=2080&mfc_pref=T&2080.donation=form1)