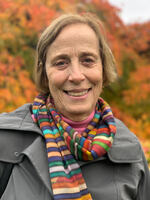 Josephine “Jody” Mayer Carlson passed away on April 5, 2022 after a brief illness, physically and spiritually surrounded by close family. It’s impossible to whittle down a whole person and a fascinating life into a few paragraphs, but we’ve done our best.

Born to Robert and Isabel Mayer on August 11, 1938 in Charleston, South Carolina, Jody was an insatiably curious child whose interests and passions propelled her far beyond her home state. Raised in Georgetown and on her beloved creeks and beaches of Pawleys Island, Jody graduated from Winthrop College in 1960 and married John W. “Sam” Carlson. The couple were stationed in Del Rio, Texas, where they had two daughters. Sam trained as a U.S. Air Force pilot at Laughlin Air Force Base and was later promoted to instructor pilot. Jody was widowed in 1966 when Sam was killed in the Vietnam War. She remained devoted to him throughout her life, and never remarried.

Jody and her daughters moved to New Jersey in 1967 so that Jody could study and pursue a career. She earned a Master of Science degree in Library Service and a PhD with a concentration in Political Sociology at Rutgers University. Her education helped launch a rewarding and varied career centered in Manhattan. Jody was proudest of her early work, which was informed by her upbringing and focused on qualitative research and data analysis to support political activism and social justice for organizations including the National Jury Project, the NAACP Legal Defense Fund and the Legal Aid Society of New York. Later, she rose to senior research executive positions at some of the world’s largest advertising and public relations agencies, where she helped leading healthcare, automotive, travel, fashion and consumer goods companies successfully launch new products and expand markets. She also conducted research for some fascinating people, including a well-known boxing promoter seeking to understand how to best reintroduce an internationally-renowned fighter into society after a prison sentence. In the last 20 years of her career, Jody ran her own marketing communications research firm servicing IT and healthcare clients.

Jody’s sociological curiosity was broad and extended to all facets of life, including politics. Dr. Carlson was the author of countless monographs, speeches and articles and the acclaimed book “George C. Wallace And The Politics of Powerlessness,” one of the most comprehensive studies ever written about the Alabama governor. She published the work while a tenured Associate Professor of Sociology at Hunter College, where she also taught the majority of the college’s race relations and gender classes.

Jody was a self-professed museum nerd and classical music lover. Many also knew her as a highly skilled cook. She loved to shop in gourmet grocery stores near Wellesley, Massachusetts, her home for the last 20 years, and was steadily making her way through her New York Times Cooking recipe box, much to the delight of family, friends and neighbors. She was also a lifelong traveler whose cultural curiosity fueled multiple trips to all seven continents, a deep love for the Silk Road and Southeast Asia, and an unabating interest in photography. One of her favorite quotes comes from Susan Sontag: “I haven’t been everywhere, but it’s on my list.” Her last trip, just a few months ago, was a three week adventure to her 49th state, Hawaii, where she island hopped with her grandson.

Jody died on the day that honors Gold Star Spouses. She is survived by her daughters Kim Benner and Margot Carlson Delogne, whose lives have been forever enriched by her loving presence and diverse perspectives, and by: sons-in-law Richard Benner and Tony Delogne; grandsons John and James Benner; brother Robert “Bob” T. Mayer, Jr. and his wife Peggy of Georgetown, S.C., and a large group of devoted friends around the world.

A virtual celebration of Jody’s life will be held in the near future. In lieu of flowers, donations may be sent to the 2 Sides Project (www.2sidesproject.com), a nonprofit started by Margot that connects sons and daughters who lost fathers on opposite sides of the Vietnam War.