To share your memory on the wall of Douglas Clark, sign in using one of the following options:

Douglas was the beloved husband of Sharon Howard-Clark of Clinton and loving father of Albert J. Clark and his wife Diane Bastianelli of Waltham, Brian J. Clark and his wife Neva of Chandler AZ and Jeffrey R. Clark and his wife Kelly of Newton. Devoted grandfather of Ariana, Ava, Brennan and Connor Clark. Dear brother of Barbara Crawford and her husband Bob of Plymouth. He is also survived by stepsons Chad Howard of Framingham, Shane Howard of Augusta GA, step-grandchildren Hailey Anne and Reese Howard as well as his former wife Angela Mastroianni Clark and three nieces and nephews.

Friends and family are invited to visiting hours at the Burke & Blackington Funeral Home, 1479 Washington St. West Newton, on Wednesday, May 5th from 4-7PM. Interment will be held at the Massachusetts National Cemetery, Thursday May 6th at 12:30PM.

In lieu of flowers, donations in Mr. Clark’s memory may be made to the American Heart Association at www.heart.org
Read Less

We encourage you to share your most beloved memories of Douglas here, so that the family and other loved ones can always see it. You can upload cherished photographs, or share your favorite stories, and can even comment on those shared by others.

3 trees were planted in the memory of Douglas Clark

Posted May 05, 2021 at 06:51pm
I knew Doug from NHS. We shared many fond memories including double dating to the proms, tobogganing on Fessenden Hill, trips to the beach, parties, and more. Although, I haven’t seen Doug in years, his name always comes up when my close high school girlfriends get together.
He was one of the good guys. May he Rest In Peace.
With sympathy,
Kathie Gardner Hebden
Comment Share
Share via:
AC

Posted May 05, 2021 at 01:18pm
Sharon
My heart goes out to you in love and sadness over the loss of Doug. He will always be loved and missed by all of us. Both of you were an amazing and a unique couple who brought love and laughter wherever you went.
Please know that you are in my thoughts and prayers.
Angie
Comment Share
Share via:

Posted May 03, 2021 at 09:37am
I have so many fond memories of Doug and his boys from swimming in their pool as a kid to bbq’s with the Davis’s to moving to Maine and having Doug visit my dad often and what their friendship meant to each other. Many great July 4th boat parades and cookouts and the infamous donut making! You were a great man Doug and I hope you’ve found dad and are catching up!
Comment Share
Share via:
DG

Posted May 02, 2021 at 09:17pm
My heart goes out to all of you especially Al, Brian and Jeff.
My thoughts and prayers are with you. I will always remember Doug’s beautiful smile. He has been loved and always will be.
Love always, Cousin Debbie
Comment Share
Share via: 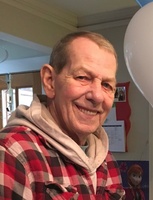